The Whole Congress is scheduled at the Auditorium della Tecnica unless otherwise specified.

The design and construction of the Auditorium della Tecnica was part of a project to gather at Eur the whole public sphere, so that the new Ministers would have been close to the big corporations’ headquarters and to other institutions. It was built next to the so-called Square Colosseum, a monument symbolizing the modern architecture.

The work of renovation of the Auditorium della Tecnica was promoted at the end of 2015 and completed in the first part of 2016. It gave great value back to a prestigious space, turned into a contemporary facility and finally recognized as part of the modern architecture of the city. Here are some of the results of this operation: the spaces were completely rearranged thanks to the use of innovative and high quality materials; systems renovation; adaptation to standards; removal of architectural barriers; energy-saving; advanced audio and video devices; development of more flexible and versatile spaces in the whole building.

The Auditorium, in particular, has great acoustics, versatile lighting for the room and the stage, professional PA system, multiple screens.

Thanks to the renovations, the Conference Centre is reborn with both a new aesthetic and a new atmosphere. It is today a modern facility, also thanks to the new features of Confindustria Palace, and it is able to compete with other structures on a national and international level, representing a landmark for the city of Rome.

The EUR district, southern of Rome, is one of the biggest examples of fascist urban planning and architecture in Italy. In 1937, the Italian dictator Benito Mussolini announced the start of construction for this district, designing a project planned to celebrate the 20th anniversary of the March on Rome.

It was built for the International Exhibition of Rome in 1942, and although The Second World War intervened and the exhibition never took place, the name stuck: in fact, EUR is the acronym for Esposizione Universale di Roma, meaning Rome’s Universal Exposition.

The layout of the EUR district includes wide streets, and majestic and imposing architectural buildings, that are massive and square, mostly built with white marble to recall the classical monuments of Ancient Imperial Rome.
The area's main interest lies in its rationalist architecture, which finds perfect form in the iconic Palazzo della Civiltŕ Italiana (Palace of Italian Civilization), built by the architects Guerrini, La Padula and Romano. Aka the Square Colosseum, with its symmetrical rows of 216 arches and gleaming white travertine marble, it is the Italian fashion house Fendi’s global headquarters since 2015.
The EUR district detaches from the rest of the city of Rome as its architecture is uniquely modern and presents any visitor with the perception of being in a timeless place, characterized by the sharp and tall buildings as well as the many green areas and massive artificial lake, creating a contrast between its modernity and the ancient buildings in the center of Rome.
The clean white marble buildings, the ancient roman architecture, along with the majestic fountains make this district seem like it was meant to be the return of the Ancient.

Very close to the historic centre of the city, the Eur district also provides a lot of services: high quality hospitality structures, direct links to Fiumicino and Ciampino airports, and Termini and Tiburtina railway stations; health centres, luxury shops, parks and green areas. Last but not least, the proximity to the Ostia coast and its many attractions.

HOW TO GET THERE


BY TRAIN
There are two big Railway Stations in Rome: Termini is served by underground B and B1. Tiburtina, by the underground B. Once you are in on of the two stations, please take the underground B or B1 to Laurentina and get off at Eur Magliana. Walk 650 m to Viale dell’Astronomia, 30.

The official language of the Congress is English.
All abstracts and presentations should be in English.

The Congress Secretariat will send you a letter of invitation upon request.
The Organizing Committee would like to clearly state that the letter is only to help the participant to obtain the visa or to raise travel funds and has no further financial obligations from the Conference towards the participant.
The Congress Secretariat will only send you the letter of invitation after receipt of your registration and payment.

A valid passport is required for non-EU citizens for entry into Italy. An identity card is enough for citizens of EU Member States.
Please consult the nearest Consulate to you for special details.

The Organizers cannot accept liability for personal accidents, and/or loss of and/or damage to private property of participants, either during or directly arising from the GYNITALY2023 Congress. Participants should arrange their own health and travel insurance for their trip.

An application will be made to the UEMS EACCME® for CME accreditation of this event.
Through an agreement between the Union Européenne des Médecins Spécialistes and the American Medical Association, physicians may convert EACCME® credits to AMA PRA Category 1 CreditsTM.
Information on the process to convert EACCME® credit to AMA credit can be found at
www.ama-assn.org/education/earn-credit-participation-international-activities. 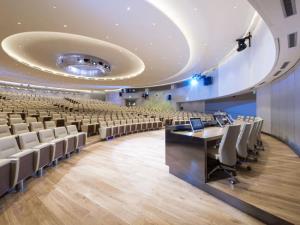